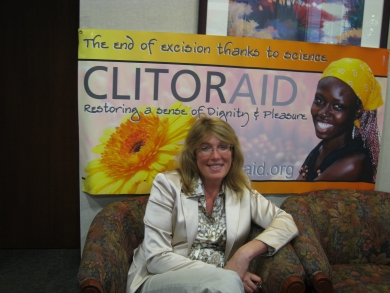 Yesterday, in San Francisco, CA, as the world celebrated the 100th
anniversary of Woman's Day, Dr. Bowers, Clitoraid's volunteer Head surgeon
operated on a new patient victim of Female Genital Mutilation. Dr Bowers
was able to surgically repair her clitoris and restore her dignity as a
woman. Once healed the patient will be able to also recover a sense of
sexual pleasure something that was brutally and forcefully taken from her.
The patient, who became a victim of female genital mutilation at age 16 in
West Africa and who lives in the US today is doing well and so deeply
thankful.
Clitoraid, a non profit organization founded by Spiritual and Humanitarian
leader, Rael is in the process of building a hospital in Burkina Faso, West
Africa that will be entirely dedicated to repair the mutilated genitals of
the millions of FGM victims who live in that area of the world. For more
information and donations please visit: www.clitoraid.org
Nadine Gary, Clitoraid Head of Operations