it's a matter of love 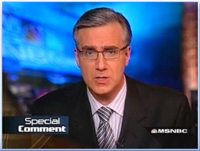 Rael sent his deepest support to Keith Olbermann this week. Keith is an anchor man for MSNBC, a very large TV network in the US. He had a special commentary following the passing of the infamous “Proposition 8” in California. By a slim margin, voters passed a law making same-sex marriages unconstitutional. :-( One of the many ironic things about its passage was the fact that minorities voted against equal rights for minorities. What a world!

We have expressed our support to same sex marriages on several occasions on this site but we thought it would be nice to share the text of what Keith Olbermann said on the subject. The link to the video, if you feel like watching him, is located below.

Here is what Olberman said:
Gay marriage is a question of love.-Everyone deserves the same chance at permanence and happiness

Finally tonight as promised, a Special Comment on the passage, last week, of Proposition Eight in California, which rescinded the right of same-sex couples to marry, and tilted the balance on this issue, from coast to coast.