why not a National Kissing Day? 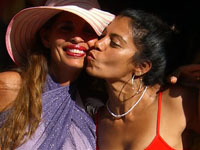 A huge local controversy was set off when 2 women were sharing kisses during a baseball game in Seattle, USA. A woman complained about the 2 giving the reason “There are children here. How will we explain that to them?”

Rael immediately pointed out the succinct truth of the matter: “I ask all gays and lesbians to start kissing in public as often and as publicly as possible and maybe even launch a "national kissing day". US authorities will then have to either forbid kissing in public for all people - including heterosexuals as is done in primitive Muslim countries, or, allow gays and lesbian to do the same thing that heterosexual couples are able to enjoy. Anything else is pure discrimination.

The people complaining that " they have to explain to the children" are totally wrong: Yes they have to explain to the children that it s OK for 2 men or 2 women to love each other. Schools should even include a curriculum which would teach complete, loving respect for gay and lesbian people. If it were like this, no parent would be "embarrassed” to explain what it’s all about.
In any case, it should never be embarrassing in any way when saying that 2 people love each other – no matter their sexual orientation. All the "embarrassment "is in the head of the one "embarrassed". When they explain to little children why a man and a woman kiss each other they are not "embarrassed" and they don’t have to explain in which position they have sex in bed. It must be exactly the same regarding homosexuals. Just 2 people loving each other is a sufficient explanation.”