Tibetan athletes should compete as independents

No need of a flag 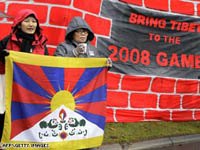 Athletes from Tibet, which has been controlled by China since 1951, can currently compete in the upcoming games in Beijing only under the auspices of the National Olympic Committee of China. The situation for some of these rejected Tibetan athletes is even worse because they are currently political or religious refugees living in other countries. They’ve been driven from their homeland, and now they’re being driven from Olympic competition as well.

In a statement released December 14, Rael gave pointed advice concerning what he called “the denial of some fundamental human rights” at the upcoming Olympic games in August.

Upon hearing of the International Olympic Committee’s decision to deny Tibet the right to send a team of its own, he said, “The best solution for all athletes would be to allow them to compete as independents unaffiliated with any nation whatsoever. That should be their fundamental right, and it would help defuse the ugly influence of nationalism, one of the most serious threats to world peace. But as of now, that right doesn’t exist.”

He added, “Athletes should also have the fundamental freedom to wear whatever they choose to wear, and not be forced to wear any national uniform. Nor should they have to stand and receive their medals while listening to militaristic national anthems, or while standing in front of national flags. These unnecessary and destructive conventions of the past are not only stupid but also generate a lot of violent feelings. You have only to look at the recent wave of violence in soccer stadiums to see the evidence.”