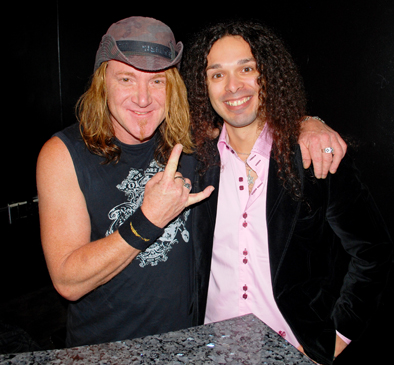 February 1st, 2011 is a date I will never forget!
After more than 20 years of dreaming about it, I finally got to meet my musician Hero: Kai Hansen.
Here is the story.
Kai Hansen is one of the world most famous and important artist of the Heavy Metal scene. Composer, guitarist, singer and a very smart person, he’s considered one of the “fathers” of Heavy metal. He became famous in the 80’s with the German band Helloween. After leaving Helloween in 1989, he founded Gamma Ray to explore new sounds, becoming in fact precursor of what nowadays is called Power Metal, a style of music full of energy, great melodies and a happy feeling with a touch of classical influence (Wagner and Mozart above all).
I have been a huge fan of his since the late Eighties and as a musician I can say that Kai Hansen influenced me a lot thanks to his charisma, his lyrics and his passionate compositions. My favorite albums are : “Heading for Tomorrow”, “Land of the Free” and “Somewhere out in space”.
Before discovering Rael's book (which we often refer to as the Message between Raelians) in the late 90’s I started to question myself about life, religion, god existence, extraterrestrials and so on. And I admit I found quite a relief in Hansen’s lyrics because they were questioning and reflecting about almost the same points.
“Land of the free” was more than a philosophical concept album, was a path towards the truths of life.
But in Somewhere out in space, Hansen started to write about extraterrestrials. Particularly the song “Men, Martians and Machines” seems to be inspired by the Messages, as basically it tells about an extraterrestrial race which came to Earth, created life and was mistaken as Gods.
Or to quote another song from “The Land of the free II”, “Real World” here’s the chorus line:
“God is an illusion and there ain’t no paradise
and there is no underworld below
Out there is no Heaven and there ain’t no Antichrist
Welcome to the real World
and the show!”
You are with me, these are wise words!
What a great inspiration it has been for me! A few months after the release of that album in 1997 I met the Messages and my life changed . Since then, one of my biggest dreams was to meet Kai Hansen and give him the “Intelligent Design” book.
Mission accomplished on February 1st, 2011! Better late than never, Charly !
I met Kai Hansen at a Gamma Ray concert at the Key club in Hollywood. With the help and support of the fantastic Alonzo Fretwell and thanks to our special VIP tickets, we got access to all areas and had a “meet and greet” with the band!
Once in front of Kai Hansen, I couldn’t hide my big emotion. I almost cried of joy. I managed to offer him the book “Intelligent Design” of our beloved Maitreya, as a present. I got his attention right away. He said that he had heard about Rael in the past. He was very happy to receive the book, since it’s a topic he likes. Last but not least while chatting with Kai, I gave him a personal consideration, such as… “Your lyrics and your songs are awesome; what you wrote in “Men Martians and Machines” or “Real World”, is right and you’re going to find out more in this book”…he had a sigh and said with pride and with a big smile, “I knew it!”
Charly Urso