Statement from the Prophet Rael 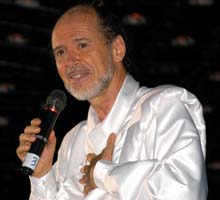 The Prophet Rael made the following statement today :

Following his illegal invasion of Iraq under the false pretence of rooting out arms of mass destruction, George Bush is now trying to justify the whole operation by posing as the champion of democracy and promising that it will definitely bring peace to the middle east. He even wants to go one step further by using the success of the Iraqi and Palestinian elections, hoping that Egypt and other countries will follow. And thus the demagogue Bush now hopes to turn his illegal mistake into a historical success and become known as someone who changed history by bringing peace into this devastated
region.


This is a new manipulation of the truth in order to give the illusion to the world that this illegal invasion of a sovereign country, carried out under false pretences, was in fact extremely beneficial. This manipulation of the
truth is part of a long tradition in this bloody adventure: