The real 7 Wonders of the World are not made of stones.

We have improved in 22 centuries ! 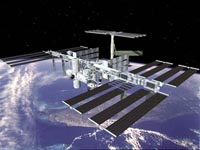 More than 100 million people chose to name The Great Wall of China, Rome's Colosseum and India's Taj Mahal among the seven new wonders of the world.
But are the wonders of our modern World really made of stones?
It is understandable that the ancient Greek observers who did the first Wonder’s list in the few centuries BC named buildings like The Great Pyramids of Giza as one of them. But twenty centuries later, the collective human genius has produced much more than these buildings but the public is more trained to admire the beauties of the past than the wonders of today.
Rael has asked Raelians to organize a new survey asking people to vote about the current 7 wonders of the world which should be about science and technology.

“The real 7 wonders of today's world are not at all old stones and ruins from disappeared civilizations... People need to wake up, we are in 2007 !
The real wonders of the world should be selected for example amongst things like the Space Station, the Petronas Tower, the residential artificial islands of Dubai, the Nile river or Three Gorges dam providing electricity to million of peoples, particle accelerators, etc...” declared Rael after reading the results of the vote.

The Raelian philosophy promotes science and the new technologies as they not only liberate mankind from the myth of god, and free us from our age old fears, from disease, death but they also free us from the sweat of labor. Should we elect a wonder for the amount of labor involved or for the ingeniousness?

2. Three Gorges Dam
The largest hydro-electric power station in the world
The Three Gorges Dam is a Chinese hydroelectric river dam which spans the Yangtze River in Sandouping, Yichang, Hubei province, China. As of 2007, it is the largest hydroelectric river dam in the world, more than five times the size of the Hoover Dam.
The dam is made of concrete and is about 2335 meters (7660 ft) long, and 185 meters (616 ft) high. For comparison purposes, the tower of Golden Gate Bridge is 227.4 meters. The dam is 115 meters wide on the bottom and 40 meters wide on top. The whole project moved about 134 million cubic meters of earth, used 28 million cubic meters of concrete and 463 thousand tons of steel which is enough to build 63 Eiffel Towers. The reservoir is over 600 km long and can hold 39.3 cubic kilometer of water. The total capacity will reach 22 500 MW and claim the title to being the largest hydro-electric power station in the world.

3. Taipei 101
Taipei 101 has been the world's tallest building since 2004. It is a 101-floor landmark skyscraper located in Taipei City, Republic of China (Taiwan)

7. Google search
Organizing the world's information and making it universally
accessible and useful!